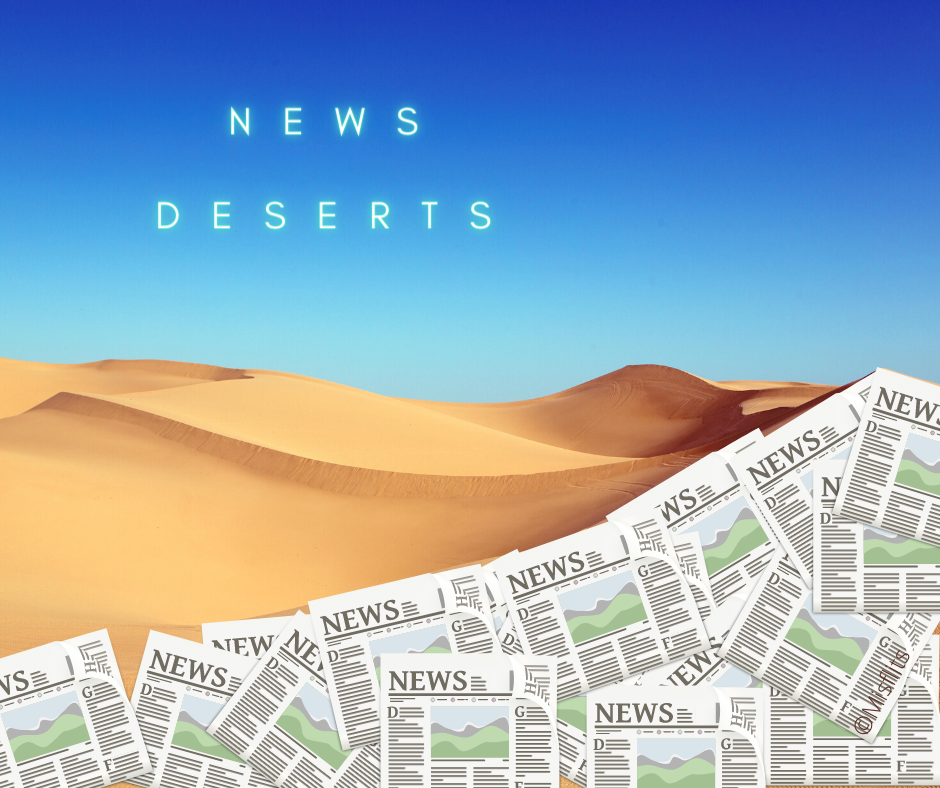 News deserts are not a new phenomenon, having first been described in the United States nearly 20 years ago. According to a new American study, their gradual growth is dividing society and making life more expensive. We confronted this macro story with our own experience and cooperated on this comment together with Misflits, our Belgian partner website.

A news desert is defined as a community that has little or no access to quality local and informationally accurate news. But what happens in areas where people are left without independent media? „More corruption, more expensive public procurement, more polarized society, pernicious spread of misinformation, lower voter turnout,” describes a new university study in America, where the extinction of local newspapers began earlier than in Europe.

Some 2 500 local newspapers have ceased publication in the US since 2005, about a quarter of the originally 10 000. That’s according to a study by the journalism school at Northwestern University in Illinois, released in late June. The study’s leader, Penelope Muse Abernathy, has been monitoring the extinction of local media in America for 18 years, and has released reports on the state of local media annually since 2016. „The loss of local journalism is accompanied by eroding trust in the media, a widening digital and economic divide among citizens, the corruption in government and business grows, and local residents end up paying more in taxes and at the cash register,” the study’s authors said.

The research shows that 70 million Americans, a fifth of the U.S. population, already live in news desert areas. Two-thirds of the 3,143 U.S. counties have no or only one daily newspaper. The study predicts that the situation will get worse, with more than 500 more newspapers likely to close by 2025. Those that survive will likely have to cut staff, threatening the quality of journalism, the authors warn.

The service-mindedness of the big media has lost its way, and it seems that the scarce local media are the only ones that can still save credibility. Even though we see many news editors setting up a research department, it has yet to be linked to the mainstream news. In Belgium there are only a few publishers who are dedicated to independent research and digging deeper. And if there are any younger newsrooms, they are not visible enough yet, or they need more time because they do not have enough resources.

News Deserts are something we have, to some extent, created ourselves in our media landscape, by the drive for status and not for service orientation, and by excessive desire to be the only ones at the top, which caused the isolation. Publishers who present themselves as the only and the best just increase the news desert climate. Not all subjects are covered, nor can they be if there are only a few people in the club who call the shots and decide which subjects to cover and how they should be presented.

While media plurality is important to serve the need of all kinds of readers. We believe in the language of abundance that says: There is enough work for many local newspapers and platforms, which do not have to compete with each other. Being democratic also means leaving room for others, and giving the best of yourself alongside each other, to enable as much diversity as possible.

Especially in news deserts, spreading of information in communities has often shifted to social media. But this has its risks and certainly cannot replace the function of independent media, experts stress. „People often turn to Facebook groups, but that’s where rumors are spread,” Tim Franklin, vice dean and director of the Medill Local News Initiative, which seeks to promote new business models and provide news organizations, both start-ups and long-established, with the tools they desperately need in the new media environment, points out to the Washington Post.

Even the Czech Republic has its Penny Abernathy – Lenka Waschková Císařová from the Faculty of Social Studies at Masaryk University in Brno has been studying regional media since 2009 and has described their gradual demise in several studies and on her website Lokálník. According to her research, more than half of the originally 60 regional newspapers have disappeared in the last decade. Many have failed to cope with the transition to the online environment, the shift of advertising to the accounts of tech giants such as Google and Facebook, as well as the pathological phenomenon that competition from town hall bulletins has proved to be.

„When people get information straight into their inbox and for free, they like to forget that there may be a ‘but’. It is obvious: the bulletins are purely political advertising for the town hall management,” said Lenka Waschková Císařová in an interview with Czech Radio. „In addition, the bulletins take advertising, so they spoil the market for other local media that live only on that. In what other field does the city compete with private companies in such a way that it takes their money from advertising?” she asks.

City bulletins were created in the 1990s as a result of the Municipalities Act, which requires town halls to keep citizens informed. „It’s okay that somebody started putting it into the mailboxes of grandmothers in addition to the official board. But let it remain an official board, an overview of decisions. Let it not play a journalism, which it is not, let it not solicit advertising. It’s not a newspaper, it’s a PR tool, same like when you get a flyer for discounts at the store,” Waschkova says.

The decline of local media in the Czech Republic has also been highlighted in a report by the International Federation of Journalists (EFJ), which was based on a monitoring mission in 2019. „Local media are in a very difficult position leaving a big part of the citizens without real independent impartial information on local interests, which has a negative impact on taking part in local debates and democracy,” the authors of the report say. „Free independent and impartial private media hardly exist as they are more or less instruments for either businessmen and oligarchs for marketing or for politicians running their campaigns. Journalists and editors are limited in topics they can write and tell about, which is caused especially by rising dependence of media on the money from advertisers. Some local websites are simply reduced to be media for press releases,” the report continues.

Tomáš Trumpeš, co-founder and editor-in-chief of the independent website Boskovice Echoes, described the dismal state of local media in his commentary for Hlídací Pes. „The current situation in the Czech Republic is catastrophic. The overwhelming majority of the population does not have quality, fair, regular and professionally prepared information about what is happening in their town halls. Even if we focus on towns of approximately ten thousand inhabitants and above, we find that almost nowhere do similar newspapers work,” writes the journalist, whose project in the South Moravian town of Boskovice is literally pioneering.

A restart of local journalism on the horizon?

In her monitoring this year, American academic Penny Abernathy, who is also a former manager of The New York Times and the Wall Street Journal, noticed a new trend: Over the past two years, the number of new online news sites has slightly outnumbered those that have gone defunct, according to the study. By 2022, there are 545 local online media outlets in the U.S., most of which employ six or fewer reporters and, on average, four in 10 are nonprofit projects supported by a combination of grants, sponsorships and donations from readers.

So it seems that traditional newspapers are beginning to be replaced by small online projects operating on a non-profit model. Those that return to their roots and the original meaning of journalism, practice journalism in the public interest, and as such are also supported by grants and the local community.

For such a restart of local journalism to be realistic in the Czech environment, grants will probably be a necessity at least in the coming years. The willingness of citizens to pay for quality content is very low. This was shown in this year’s survey by the Association of Online Publishers: although 91% of citizens consider it important to have independent local news, almost 65% are not willing to pay for it.

People have become too used to information being free “on the internet”. But it is highest time to ask what sort of information it is. No content is created for free, and if citizens don’t pay for it, someone else will. But then that person also often co-decides what information reaches people and what does not.

More interaction with the public. Although it can feel like pulling a heavy cart

Ria Goris, Journalism researcher at the Erasmushogeschool Brussel, draws positive future scenarios in her research rapport of May 2021. Although reliability and quality will be paramount, she said, they will have to go hand in hand with greater interaction with the public. According to the survey of respondents, a hybrid form of journalism is on the horizon, and in the most positive scenario, people will again be willing to pay for content once the biggest breach of trust has passed and trust is restored. The negative scenario reflects the downside of this story.

Given that we are in a period of transition, it is important to keep looking and comparing, not only based on independent research, but also taking into account the findings and observations resulting from communication with readers.

Despite our best efforts to serve the community and deliver quality journalism, as regional journalists we sometimes feel like we are pulling a heavy cart. More and more people are fed up with breaking news and there is a massive ignoring of the news itself. Citizens may still receive the news on a daily basis, but their engagement often does not extend beyond their own home and garden, let alone their village or town. And they do not bear all the blame for this; partly the media itself has turned viewers into lazy, apathetic consumers.

If we go to a hairdresser, we don’t expect him to make us a haircut for free

During the Covid-19 pandemic of the last two years, it was more possible than ever to observe groups of so-called fake-news warriors, who sometimes swept the news under the carpet, and confusion-mongers who wanted to undermine everything. Although Misflits and Apel Pilsen did not report on the pandemic itself, we noticed that citizens were sometimes impervious to new things. It was an ideal observation period to see what people were really open to.

We think that it will be up to us to monitor what is happening together with the public and become a watchdog for true and false news. Public engagement is important, as is looking beyond ourselves to the sustainability of the system for our future generations. Local reporting and coverage of more complex issues is becoming rare. Time, money, and public trust are lacking. As an online regional platform, we are confronted with this almost daily. We are slowly building our news coverage and getting to the people step by step and actually much slower than we would like to. It’s not easy to create quality articles and spend a lot of time on them when there is little or no revenue if you choose not to rely on advertising. The fact that you can’t earn anything with your work for a period of time can sometimes be completely misinterpreted. But of course, the world continues to spin at top speed.

A paradigm shift would be very simple: when we go to a good hairdresser, we don’t expect him to give us a free haircut either. We need to realize that just as we can’t have a free quality haircut on our heads, we can’t have quality information for free in our heads.